How it all started

As a child of the sixties the photographer Donat Kamber was interested from early on in magnifying glasses, telescopes, microscopes and all kinds of optical effects. He was particularly fascinated with the work of the Hungarian Op Art artist Victor Vasarely. At the age of 14, he constructed his first camera and by 20 he exchanged this for a Rolleiflex camera. He discovered the potential to tackle social and humanistic subjects and to picture them. The work of social Realism painter Ilya Yefimovich Repin, began to have an imprint on his perception and on his photographic view concerning his surrounding.

A Swiss photographer in China

Between 1988 and 1993 very few people from the West lived and worked in China. Nobody in the West expected at that time that somebody could be interested in China. Specially at a time when an unusually relaxed equanimity and a liberal lightheartedness established themselves in the country.

During that time Donat was privileged to travel and work as a photographer even in the most hidden areas of China without restrictions on time or territory. He wanted to get to know the non-official China and document it photographically.

He portrayed people in the countryside, in the paddy fields and in the streets of the Chinese megacities. He documented life in the highlands of the Himalayas, the settlement areas of Inner Mongolia and Hainan Dao, in the South China Sea. His camera encompassed the endless vastness of the Gobi Desert, the oases and cultural sites along the old Silk Road, the Taklimakan in the Tarim Basin.

At the end it took 5 years and 28’000km with public transport, e.g., trains, buses, ships, and also planes, bicycles, on foot, rafts and carts. It was overpoweringly fascinating and so even after all that intensive work, the Swiss photographer found it difficult to stop.

On his personal inspection journeys 30 years ago, he was trying with his subjective view to take stock of what was still left from the old China. It quickly became clear that Donat’s work has documented a world, that lasted for a long time, but then disappeared to make room for something radically new. Thus the 144 large-size Tableaux came into being, recollections of a lost and forgotten, today no longer existing China. 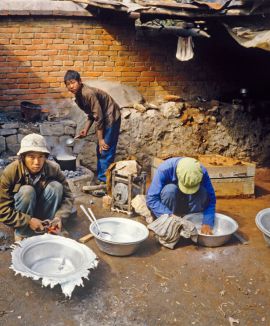 Small Tin Foundry in the Mining Town of Geju

Small Tin Foundry in the Mining Town of Geju 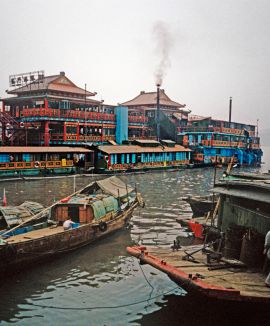 Floating Restaurant on the Pearl River in Guangzhou

Floating Restaurant on the Pearl River in Guangzhou 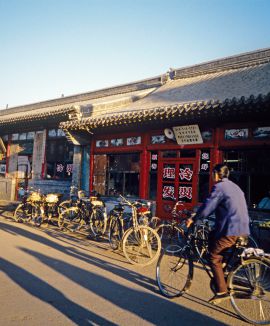 Shopping Street in the Old Town of Hohhot

Shopping Street in the Old Town of Hohhot 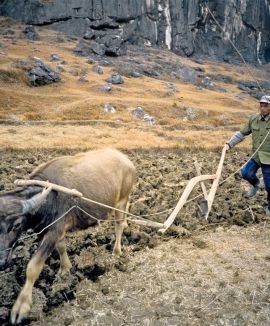 Field Work with Water Buffalo Outside of Guilin

Field Work with Water Buffalo Outside of Guilin