The artist Silvia Ingrid Hummer grew up in the artist village of Wallnstorf and thus has dealt with the arts early in life. In her youth, she experimented a lot and unfolded herself artistically. In this self-study, she has permanently developed. “Those who follow in the footsteps of others, don’t leave their own trace” - she has always remained faithful to this motto and has found her own style.

For the artist creating art means being free and not dependent on anything. Casually but certainly not incidentally, she paints when, where and however she wants. Acrylic has always been her companion. And it was fate again, when finally a bag of concrete and a sack of plaster literally fell into her hands - two materials that she now increasingly uses in her work.

In a world of “more and more,” she consciously counts for less. The reduction and simplicity of her pictures are supposed to captivate, and on closer inspection, to discover that less can be more. The limited coloring, as well as the abstracting strokes are reminiscent of Chinese calligraphy, moved with a lightness but strong momentum. However, the semantic meaning is detached from the sign per se. The expressiveness assumes the emphasized structure of the brushwork, which has a certain internal movement and thus confronts the viewer with the work.

The art stays in the center and the white space works as a space for "breathing", for thinking, for the imagination, and these are known to have no limits. Just as little are the boundaries between ideology and art. 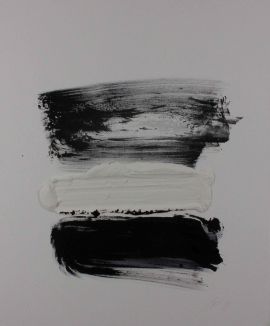 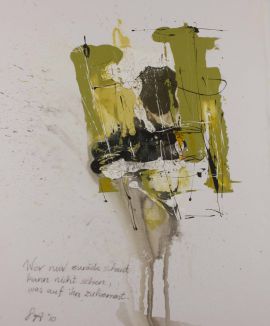 Confucius: " The One Who Can Only Look Backward Cannot See What Comes Up to Him."

Confucius: " The One Who Can Only Look Backward Cannot See What Comes Up to Him." 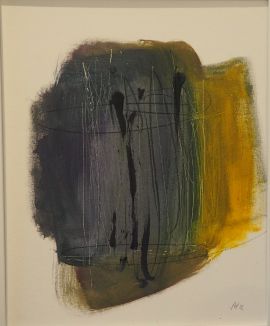 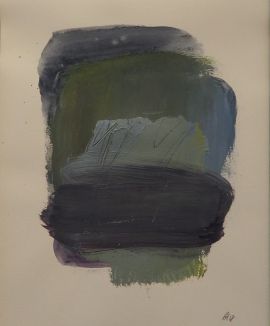